As soon as I arrived I heard, why Japan? From a local.

Well, because there is such a graceful elegance to the culture. A politeness in efficiency that makes navigating easy and there is so much to experience from the food, to the sights, to the culture, lots of shrines and Sake. 😉

All in all my flight from LA to Tokyo to Hong Kong and back was 750 dollars. A price comparable to what I’ve paid traveling to the midwest or east coast from LA. Good job Kayak.

After getting off the plane, my friend, who I’ve known since I was 15 met me in the terminal as she came in from Chicago.

Where the F do we go? It felt like a video game. Ding ding ding. At first it was like a puzzle in disarray, then all the pieces fit into place.

We stayed at the Prince Park tower for a relatively good rate. Little did we know it was a holiday and were wondering why everyone was dressed so snazzy. 7-5-3  is a traditional rite of passage and festival day for three- and seven-year-old girls and three- and five-year-old boys, to celebrate the growth and well-being of young children. How jubilant. We saw many people dressed up with their children in traditional colorful Japanese Kimonos and outfits.

We stopped at must see Shibuya crossing which was a bit slower than usual given the observance of the holiday, nonetheless it was still busy.

We then took the train up to Shinjuku and walked around the Shinjuku-Gyoen gardens, peaceful, zen-like and intricate classic Japanese gardens. We walked over to Hanazono shrine, hidden between the city scape. Peaceful and moving as families were there celebrating.

We walked around parts of Shinjuku and found alleyways with grilling Japanese kebabs.

The Tokyo tower lit up for France. I was holding intentions for peace, healing and love. For Paris as well as the many attacks that have been happening worldwide.

We decided to head to Harajuku, famous for teenage pop culture and quirky, colorful displays in fashion. Walking down Takeshita. We stopped at several stores, fashion forward.

Then we meandered over to Meiji Jingi shrine and observed a classic wedding taking place. Meiji Jingi sits on hundreds of acres and was built during the time of the enlightened era in Japan by Emperor Meiji and his wife, Empress Shoken.

Before heading back to the hotel, we stopped at a street vendor. I had to try Takoyaki after my curiosity was piqued, it was super scrumptious, melting in my mouth. Octopus rolled and topped with cheese and spices and sauces that I have no idea what they are called. 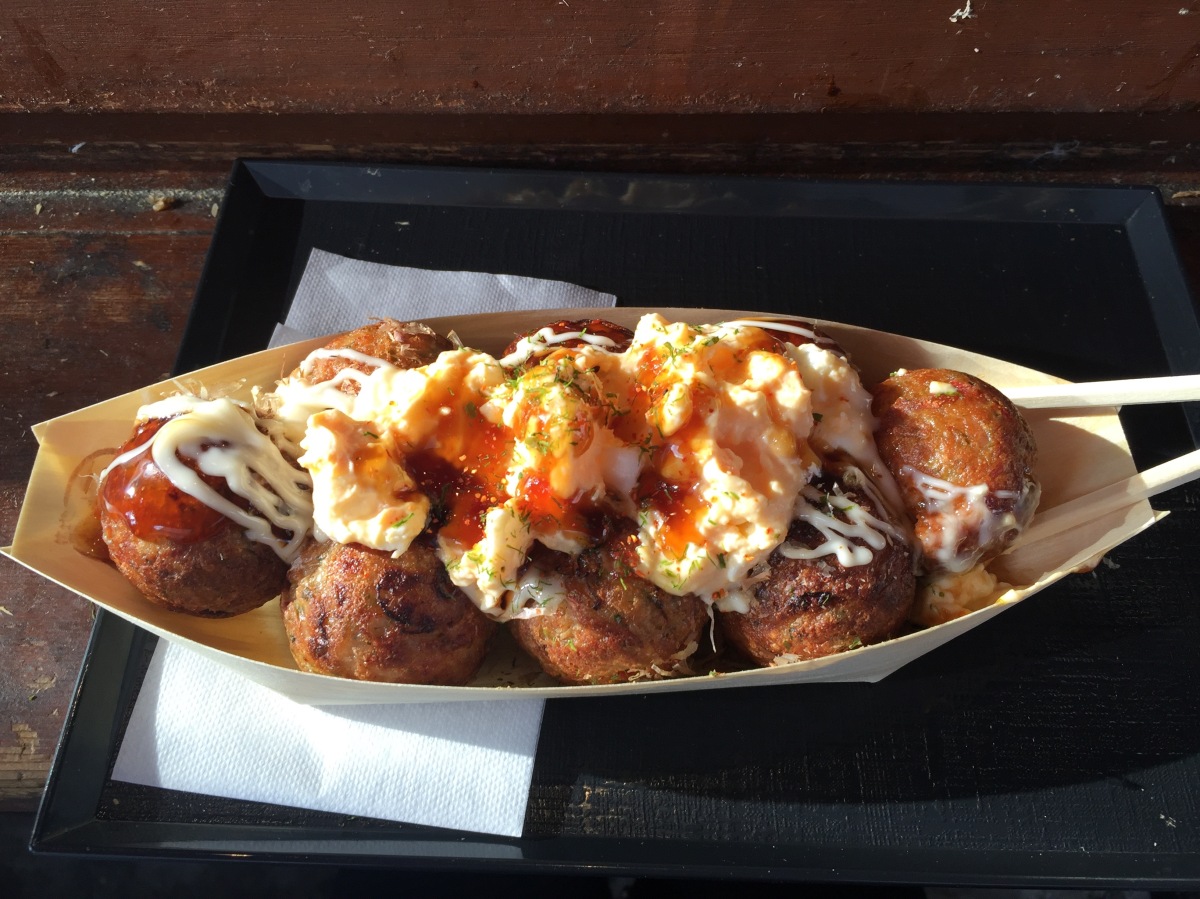 After resting and regrouping we went to dinner at a European restaurant where we met a group of Japanese guys, who were a bit toasted and all kept exclaiming “Pasta”. Which may or may not have the same meaning translated from Japanese to English. We chimed in, still trying to figure out what it meant.

A beautiful reprieve from the bustling and busy city. Again navigating the trains we took one an hour outside of the city to Kamakura, which was once the political center of Japan in 1192.

There is much historical significance and when walking through the quaint and cozy streets it feels much different than Tokyo. Below are Samurai swords.

We went to Hasedera temple, devoted to Kannon, the Goddess of mercy and the Great Buddha, which both were quite impressive in their size as well as antiquity. There were tunnels we had to bend down into the dark into several passageways, twisting and turning, each stop temples and tiny statues everywhere. It was damp and earthen with smell of antiquity. 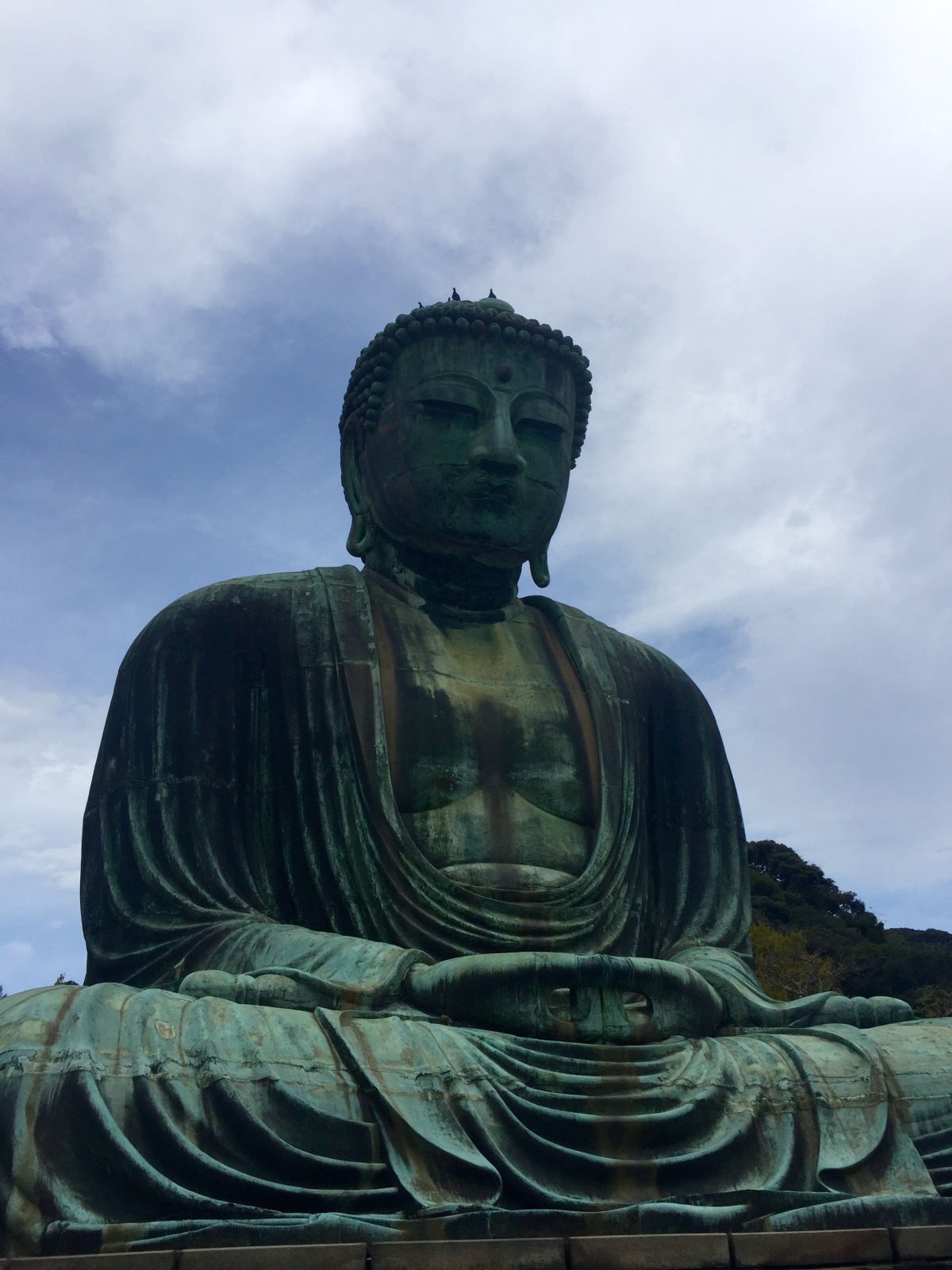 With our well used purchase of the JR ticket we headed to Kyoto on the bullet train. I was excited to experience the bullet train which averages about 200 mph. We arrived and it was raining and a bit chilly, for lunch we went to a nearby place called Kamo which had vegetarian options. I then went wandering into Kyoto and found several bemusing shops and had an acupuncture treatment that was so very thorough.

We ate at a little treasure that night, what we found out was an old Geisha house turned into restaurant. This special place had different rooms, sliding doors and maintained a quietness, it felt very decadent, secretive and elegant. Which is fascinating given that Kyoto is known for its prestigious Geishas. They are trained in various traditional Japanese arts such as dance and music, as well as in communication and entertaining.

We started the day early, as seemed to be our ritual. The time change made it feel much later as we usually woke up around 6:30 am. We went to Nijō Castle, which was built in 1601, parts burnt down and was again rebuilt. It’s intricately impressive in its history and architecture. A time when empires ruled society and caste systems were more common. We then went to Kinku-Ji, the golden pavilion. It’s a golden inlaid Buddhist Zen temple and popular for tourists. While extremely busy, it was well worth the crowds to see the grandeur of this temple and its gardens.

Audaciously, I wanted to find an sento onsen, to at least try it. There is a fine art of bathing which I find rather intriguing and I wanted to experience this classic tradition. I ventured alone after a recommendation from an ex-pat we met, the spot was a bit off the popular path in Kyoto.

I followed the traditions by watching how others were, not wanting to be too obnoxiously American, but also not knowing what I needed to do to follow suit. Once inside men and women are separate and there are 5 baths. One has a jacuzzi, one is electric a few are hot and they all come from hot springs below. There was an outdoor area with a cold and hot bath amidst a garden which was lovely. I felt like I left the womb when leaving, all soaked, softened and ready to go.

I wanted time to meditate and have a solo journey, navigating to me is a test of my mind and I like the challenge at times. It’s knowing where to get off and on and there are signs in English. I took the train up to Kurama. I am a Reiki master and felt the pull of this mystical place calling me to it. It is where Mikao Usui meditated for 21 days and received the Reiki healing energy.

Taking the train up is quite magical as one leaves the city, with tall trees and waterfalls. Walking up and through the mountains to the top shrine I meditated while a zen ceremony was taking place with a monk giving blessings.

It was serene and gorgeous with the autumn leaves. There were shrines to stop at on the way up, tranquil and deep in the mountains. Afterwards I went to a traditional style Japanese lunch/dinner sitting on the ground, in quiet contemplation and another onsen set amongst the mountains. Like I said, I revel in the art of bathing. 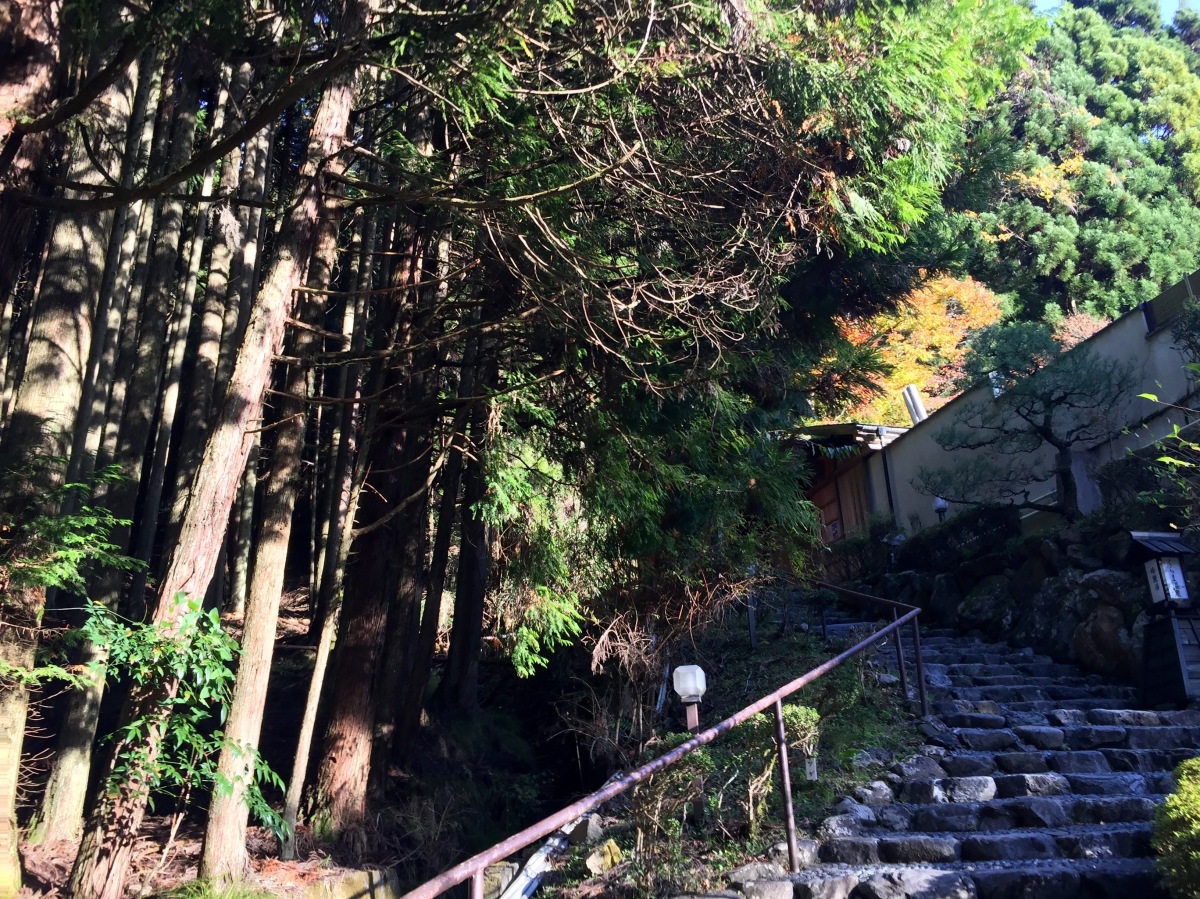 I ate Kebabs and had Sake with friends whom I met from Japan and Taiwan after wandering into a place in Kyoto once back.

We took the bullet train back to Tokyo where we were staying in Ginza for two nights. We decided to go out in Rippongi which is the cool, hip, club area. It was fun, crazy, a bit over the top glittering club frenzy.

The food. Yum. Sushi, of course! Yet, it’s the other foods I wasn’t as familiar with that impressed me the most.
I met new friends again from wandering into a Monjayaki grill in the Tsukishima district while waiting for my Owl cafe appointment.

It surprised me this street I found, filled with Monjayaki restaurants I went into a couple. Monja as it’s known is chopped veggies, fish or seafood, with a batter that is poured on it once the chopped portion is grilling, with a pancake like consistency, it looks wary but is delectable. 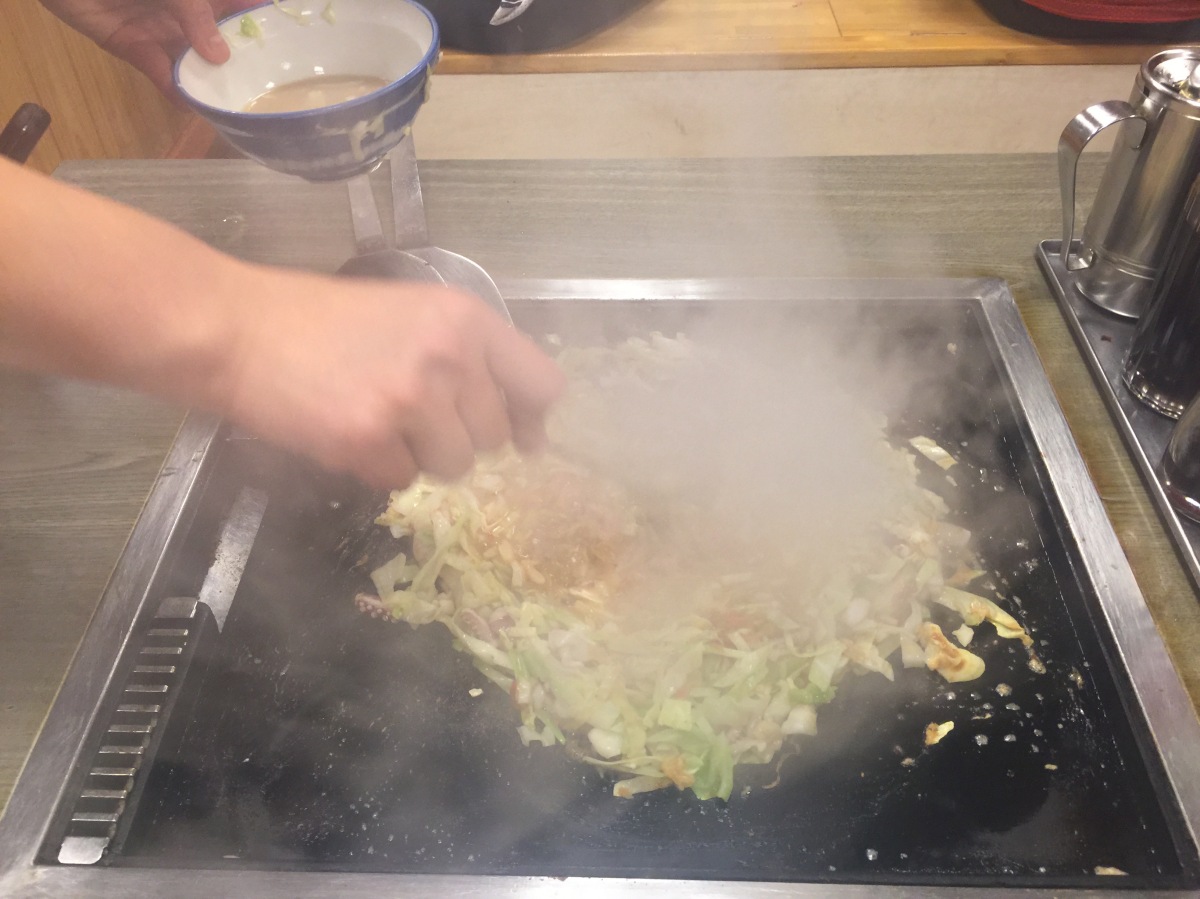 A gem, yet again from venturing into new terrain. What an amazing way to experience a more local sensation.

What a cool experience that was. Owls are one of my spirit animals so to experience so many in one place was pretty intense. All eyes on me, or so it felt, with their penetrating gazes that stare deep into the soul. I felt many things from these majestic creatures. Images and ideas of times long ago, deep in the forests and nighttime exploring. 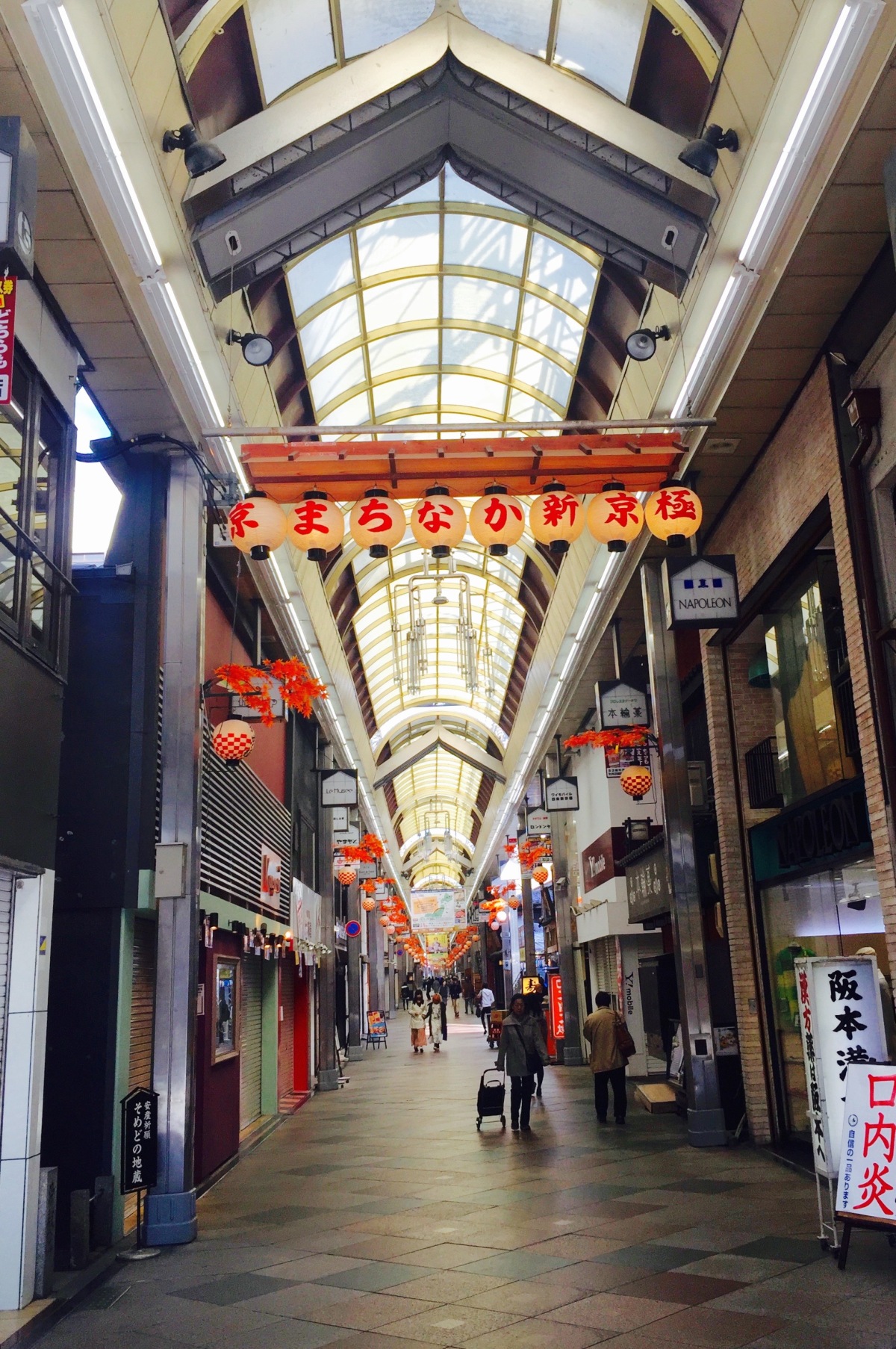 The vibe is so very Zen while bustling and busy, yes quite a paradox indeed. The people are exceptionally nice, gracious and helpful. Unbelievably so.

I feel I can let my mind escape and dream and not have to explain why I’m dreaming here. I have my setbacks show up sometimes but that’s life and traveling, is it not? 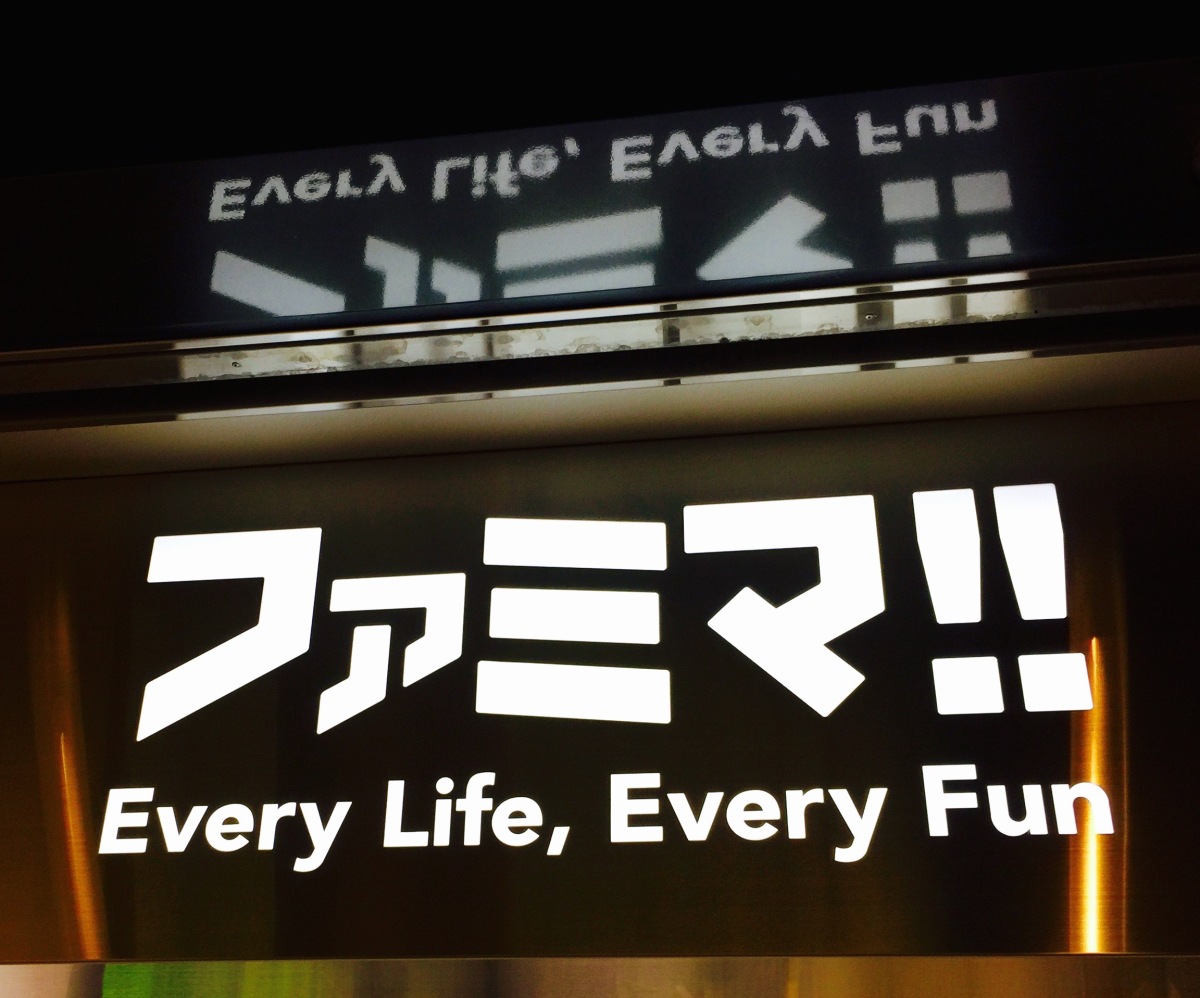 While dreaming and wandering in my dreamscape, especially on this trip which unexpectedly turned into visiting many temples and shrines and tuning into the realms of my spirited nature. Also, from not having my phone always connected, I felt present to the tactile world, which helped me to be with each experience, just as it was.

Magnificent if you think about what takes place to experience what we do, the organizing structure of our universe. From the macro level, to the atomic and quantum level. We are the dreams of what came before us, those of our ancestors and creator. Conscious of creation creating in and around.

Oh glory of creation you astound.

What is your moment and can you bring it to its glory?
xo,
Nicole

I’m off to China and will post when I get back! You can also check out some of the same pics and more on my Instagram account. nicole_astara. Compai!

7 thoughts on “Adventures in Japan”